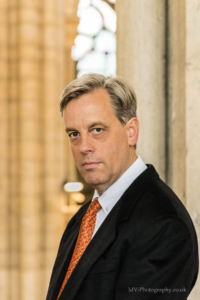 David Hirst is one of the few English organists to have fully integrated into the French organ world.  Based near Paris, he is Organiste Titulaire of the 12th-century Collegiate Church of Notre-Dame in Mantes-la-Jolie.  He presides over the three organs of this magnificent edifice (the 1897 Merklin, the 1988 Danion and the 2013 Cogez) and is Artistic Director of the International Organ Festival which features world-renowned performers such as Olivier Latry, Philippe Lefebvre, Jean Guillou, Daniel Roth and David Briggs.

As a recitalist, David performs regularly across the world.  Recent appearances include festivals at Chartres, Bourges and Antwerp Cathedrals, St Augustin’s in Paris, the Laurenskerk in Rotterdam, and venues in the UK, Germany and Switzerland.  As well as the festival in Mantes, he performs regularly at Marie-Claire Alain’s previous church in Saint-Germain-en-Laye.

David holds a master’s degree in music from Cambridge University and a postgraduate diploma with distinction from  the Royal Academy of Music in London where he studied organ performance under Lionel Rogg.  He has also studied under Nicolas Kynaston and Thomas Trotter.

David’s discography includes the first CDs ever recorded on the historic Merklin and the new Cogez organs of Mantes-la-Jolie.  His latest disc was issued to critical acclaim by the Priory label in 2022.